English Translation from Google, it’s a little rough with the context for Google may make the article read a little odd. The article is a great read, going into Kris’ plans if there is a lockout and his thoughts on the CBA discussions. 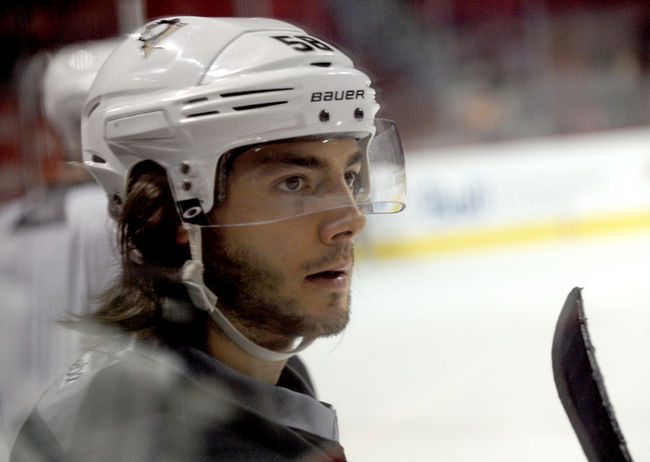 Kristopher Letang is not afraid to tell the truth. Sidney Crosby’s teammate with the Pittsburgh Penguins has already watched his options in the event of another lockout in the NHL.

“I have several plan B in mind,” said Letang at the output of a simulated meeting with several Canadian veterans, including Andrei Markov, Brian Gionta, Erik Cole and Josh Gorges Friday in Brossard.

In just 25 years, Letang still not lose sleep before the threat of a third conflict in less than 20 years in the NHL.

“I can say that I’m not really nervous with this reality. My goal will not change. I want to play in the NHL this season. But I can not imagine living a year without hockey. I’ve looked for teams in Switzerland and Russia. There are several interesting scenarios in the event of a lockout. ‘

Not afraid of Russia

Represented by Kent Hughes, Letang has explored the field with a team of the first division in Switzerland to look more towards the KHL.

“I’m really not the only guy who has ever thought about the alternative plan. I would not be afraid to play in Russia. I know several guys who have played in the KHL and they enjoyed their experience. It is no longer as before. In addition, this year, there is a team in Prague in the Czech Republic and one in Bratislava, Slovakia. ‘

Although it is still far from flying to the old continent, has developed its strategy Letang with his agent.

“If I had to sign a contract with a team in Europe, I would make sure to get an escape clause that would allow me to return to Pittsburgh at the end of the conflict. I also négocierais with the team that pays the fee for insurance. ‘

Letang, who became a father for the first time in a few days, keep a very close eye on the negotiations between the clan that Gary Bettman and Donald Fehr.

Letang said happy to resume talks on Friday in New York, even though it was informal meetings. It was the first time since August 31 Bettman and Bill Daly and brothers Donald Fehr and Steve met at the same table.

“Each discussion is a good sign. Since a few days, it was a pretty dead time for negotiations. Nevertheless, there is a great solidarity among the players and we all support Donald Fehr. We believe in him and we know what he can do. It has established a good system in its long passage in the MLB. ‘

For several days, Gary Bettman has threatened a lockout without a new collective agreement by 15 September at midnight. Letang’s eyes, there would still be able to negotiate this famous after deadline.

“The date of September 15 has not a lot of meaning. We always talk about this date since it is specific day that the collective agreement expires. I think it will still be some time after September 15. The preseason games will take place only at the end of September and the season will open Oct. 11. ‘

Wait for the right offer

“I took the time to analyze the two offers owners and I do not understand the definition of concession, he said. They do not franchise since the beginning of negotiations, they are just trying to plug their hole with money players. ‘

Under the rules in effect for the next eight days, players receive 57% of revenues related to hockey. During his first offer, Bettman wanted to drop the players 43% before increasing to 46% in its second proposal.

“We fought for certain rights in our last collective agreement, but to get there we had made many sacrifices. Even today, they ask us to resume our earnings. This is simply ridiculous. ‘