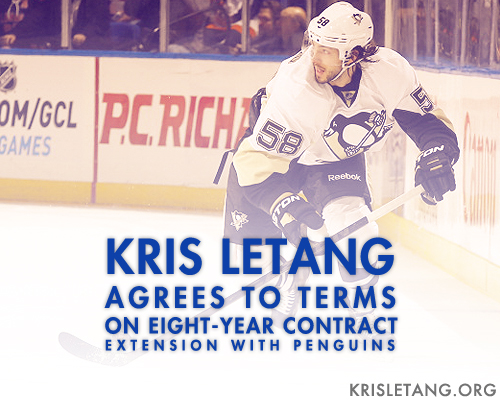 The Pittsburgh Penguins have agreed to terms with defenseman Kris Letang on an eight-year, $58 million contract extension, it was announced today by executive vice president and general manager Ray Shero.

Letang, 26, is coming off his best season, finishing third in balloting for the Norris Trophy as the best defenseman in the NHL. Letang led all NHL blueliners in both points (t-38) and assists (33) while posting a plus-16 rating and in 35 regular-season games. His 1.09 point-per-game average led all defensemen.

The 6-foot, 201-pound defenseman established careers highs during the postseason with team-leading totals of 13 assists and 16 points in 15 contests. Letang’s 16 points were tops among league defensemen, while his 13 assists were second in the entire NHL behind only Boston’s David Krejci (17).

Letang, a native of Montreal, Quebec, was a key member of the Penguins’ 2009 Stanley Cup championship squad, ranking second among team defenseman that spring with 13 points (4G-9A) in 23 games. His overtime game-winning goal in Game 3 against the Washington Capitals in the second round was a key moment in Pittsburgh overcoming a 2-0 series deficit.

A two-time NHL All-Star (2011 and ’12), Letang has proven to be one of the highest-scoring blueliners in the NHL over the past three years. During that stretch he ranks first among NHL defensemen with 107 assists and fourth with 130 points in 168 regular-season games. His 0.77 point-per-game average places second behind only Ottawa’s Erik Karlsson (0.79).

Letang has added 47 points (13G-34A) in 80 career postseason games. His 13 goals and 47 points both rank second in franchise postseason history behind Larry Murphy.

Prior to joining the Penguins, Letang played three seasons with Val d’Or of the Quebec Major Junior Hockey League (QMJHL) from 2004-07. During his final season in 2006-07, Letang won the Emile “Butch” Bouchard Trophy as the league’s top defenseman and the Kevin Lowe Trophy as its top defensive defenseman.