Kris Letang was interviewed and featured in this great article by Dan Rosen at NHL.com. The article details Kris’ experience and feelings with the neck injury during the playoffs, recovering from it, and returning to the team! 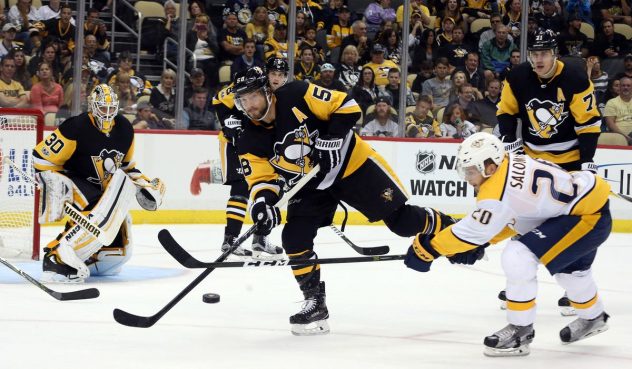 PITTSBURGH — Pittsburgh Penguins defenseman Kris Letang has played more than 75 minutes in the first three games of the season. Six months ago, his neck was in a brace, immobilized after surgery, and he feared he might never be the same.

“I was scared,” Letang said Saturday, hours before playing 25:59 in a 4-0 win against the Nashville Predators at PPG Paints Arena.

Letang has had multiple concussions, a broken toe, broken foot, broken hand, an elbow infection, groin and knee injuries, unspecified upper- and lower-body injuries during the past six seasons, when he has missed nearly two season’s worth of games (153). Most notably, a stroke knocked him out for about three months in the second half of the 2013-14 season.

But Letang said the neck injury he dealt with all of last season, a herniated disk that required surgery in April, was the most painful for him and the hardest to come back from.

“The stroke, it’s like this, ” Letang said, snapping his fingers. “It happens,” Letang said. “You’re in the hospital for three or four days trying to dissect what happened, what’s wrong. It’s scary. I’m not going to lie, it’s scary. But for my career, the neck is more of an issue than the stroke. The stroke is more life, outside hockey, but for a career in hockey, the neck was scarier.”

Letang said the surgery, which knocked him out for the Stanley Cup Playoffs and Pittsburgh’s run to its second straight championship, couldn’t be put off until after the season was over. It was more than just playing through pain.

“There were major problems in there,” Letang said. “I had to do the surgery when we found out. That was the only scary part. From there I got reassured that everything was going to be fine, but after you get the surgery, the first two weeks you’re stuck in a collar or stuck in your bed. It was really hard.

“[With] other injuries you can move. If you have shoulder surgery you can still do tons of things with your legs. With the neck, you can’t even bounce. It’s your neck. You can’t drive. You can’t do anything. That’s what made it really difficult.” — continue reading!