I got to give Duper my drawing at the signing, and he showed it to the other guys, and Brooks said I got the eyebrows right. Tanger looked at it and his eyes got all big as if to say “wow!” I told him it was a pic of him with the Wild, so I had to make it look like a Pens jersey.

Then Tanger, moved something off the table, and said “Mines better!” to which he pointed to his Duper cartoon he drew on the table! I laughed and said “Yeah that’s really good! I like the eyebrows!’ I went to take a pic of it when Duper leaned in and made a funny face!
Then after I took the photo, Tanger started adding more hair, drew a tongue, and then started drawing legs too! I told him it looks like he has peg legs! Then Duper said, “OK I think you’re going too far!”
He also drew a little stick figure, and my friend asked him if he was playing hangman, so then he drew 5 dashes and wrote D-U-P-E-R
under the stick figure. 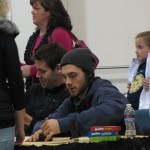 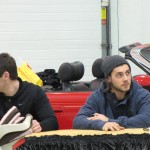 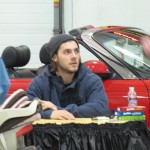