On February 15, I went to the Penguins game against the Anaheim Ducks. I was very excited because it’s rare that you get to see a team from the Western Conference at the Consol Energy Center. I went to the game with my friend Emily and her family. It was really cool because we got to be in the huge suite called the Canadian Club Party Suite. Half way through the first period Emily told me they had a surprise for me. They got passes to go into the locker room! It was the coolest experience I’ve ever had. I got to go down to where the bench is and I got to sit where Kris Letang sits!

After that I got to go into part of the locker room and Kris came out just to meet me! I would have been able to go into the main part but they said it was a bad atmosphere because everyone was upset with the tough loss. The people working there knew that I wanted to meet Kris so they told him to come out and meet me and that I am his biggest fan. Kris came out and greeted us with a handshake. I could barely speak but I did manage to get some words out. He talked to us for about 20 minutes and it was awesome. We told him how I was moving to Washington D.C. and he wished me luck and told me that I better still root for the Pens. We also talked about the great save he made that night and he replied that he was “just trying to help out my goalie friend”. While we were talking to Kris, Jordan Staal and Brooks Orpik were there talking with other people, and Sidney Crosby walked by and stopped to say hello and asked us how we were doing. Finally it was time to say goodbye to Kris. He signed my shirt and my hat and we took some pictures together. He wished me good luck in D.C. again and said that I better be at the Caps games for all the Pens visits. He shook my hand and wished me luck again. It was the coolest thing I’ve ever been able to do and Kris is definitely one of the nicest players I’ve ever met. 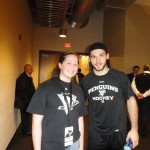