I met Kris Letang at the “Meet the Penguins” event at Tom Clark Chevrolet on January 3, 2011. My friends and I got our tickets at about 1:45 and came back about 2 hours later. We had been waiting for a few hours when our numbers got called at about 6:30. Kris was on the end and was the first one I saw. My two friends, one drove me and one just came along, asked who he was and when I told him all they could say was that “he’s gorgeous,” which he is, but I was hoping they wouldn’t say anything like that within earshot of him because I know it would just make him feel uncomfortable. When we had finally gotten through the line, to the very last two Pens, I had given my poster to Dupuis to sign and then he slid it to Kris. After he signed my poster he looked up at me with the sweetest smile on his face and handed it to me. I said thank you and he kind of shyly mumbled something, “you’re welcome” I’m assuming. Then I stepped back and took a picture of Duper and Tanger, which was kind of awkward for me. I had wanted to get a picture with them, but the security guard was rushing everyone through and not allowing the guys to take pictures with anyone anymore. It may not seem like much, but this meant the world to me and I am forever grateful that I was given this chance. 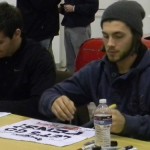 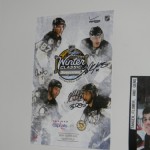