Jenny, I good friend of mine and awesome Penguins fan (Kris Letang is her favorite!) shared her story and photo from her time at West Point when the Penguins came to practice. Read her story below and check out the photo! Thanks Jenny, for sharing your experience with KrisLetang.org!

I attended the Pittsburgh Penguins practice at United States Military Academy in West Point, New York. The Pens were there practicing from September 27-29. I attended both Saturday and Sunday, and although Letang had been injured and was not practicing with his team, I was able to meet him as he did mingle with the fans after the practice. Letang came out of the building after practice and was on his way to have lunch with the cadets in another building. As he was in a hurry, security would not allow him to stop and pose for pictures; he could only do autographs. As he was signing an autograph for me, I said, “Oh my God, you are my favorite!”  He looked up at me, smiled and said, very shyly, “Thank you.”  It was nice to be able to tell my favorite player how much he meant to me and to see that he was so appreciative. I also met a lot of the other Pens players that weekend.

The picture that I took of Kris is attached. I had an amazing, memorable time! 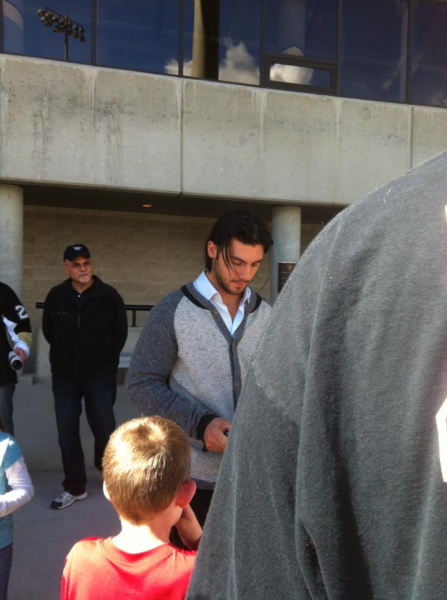