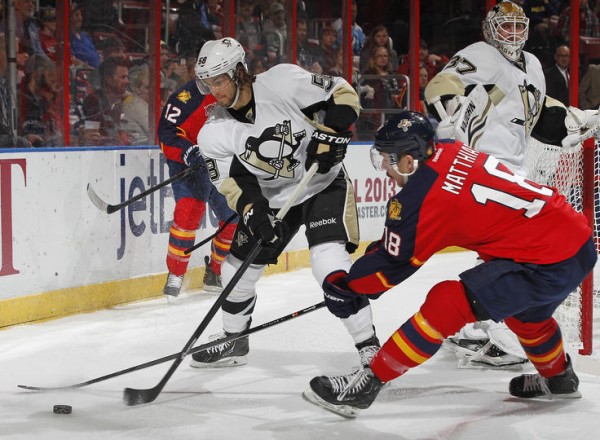 Goaltender Jeff Zatkoff made his NHL debut in the BB&T Center Oct. 11 against the Florida Panthers. In that game he surrendered six goals in a difficult contest as the Penguins fell 6-3 to the Panthers.

Zatkoff returned to Florida on Saturday night and exorcised the demons of that loss with a spectacular 39-save performance between the pipes to lead the Penguins to a 5-1 victory.

“You always want to play, especially against a team that put up six on you the last time,” Zatkoff said. “That wasn’t my best the first time around. To come back in and get that second opportunity was nice.

Zatkoff made several clutch stops in the first period against Aleksander Barkov and Marcel Goc to help snuff three Florida power plays. He finished the game strong as well with a pair of sick saves on Jimmy Hayes and Scott Gomez in the third period.

“I thought he was very good, came up big for us on numerous occasions, first period in particular,” head coach Dan Bylsma said. “On three penalty kills he had three or four very good saves to keep that zero. Our best player tonight was Jeff Zatkoff.”