Pens win 3-2, in a close game against the Devils 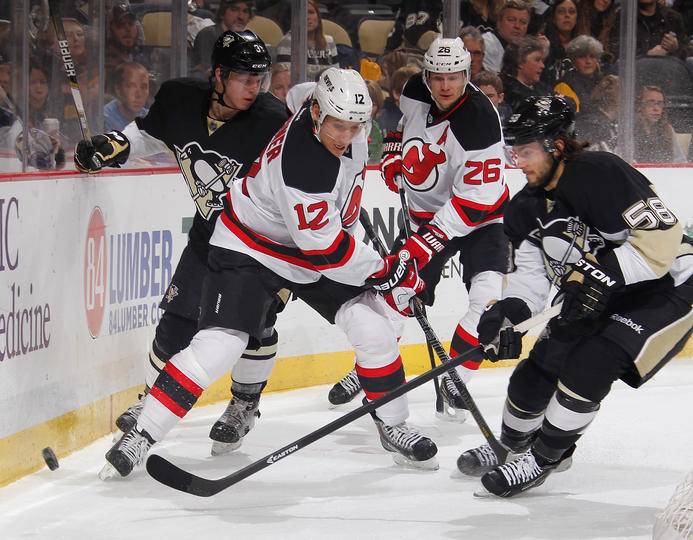 A three-goal first period proved just enough for the Pittsburgh Penguins to hold on Friday night to beat the New Jersey Devils, 3-2, winning for the seventh time in eight games.

After one of the strongest periods of the season in the first, Pittsburgh won despite being dominated by New Jersey in the second and third periods, due in large part to the exceptional play of goaltender Marc-Andre Fleury.

“They had some Grade A opportunities that we gave up, breakaways and 2-on-1s,” head coach Dan Bylsma said. “Marc-Andre had to make a handful of excellent saves. Not to mention the end of the game where there were flurries and pucks to the net, pucks in the blue paint. He had to be strong around the crease.”

A pair of Pittsburgh penalties in the second period allowed the Devils to show signs of life, as they closed a deficit that was 3-1. Goals from Patrik Elias and Dainius Zubrus highlighted a second period dominated by the Devils, one in which they outshot Pittsburgh 19-5.

The chances came aplenty on two Devils’ power-play opportunities in that second period. Pittsburgh managed to kill off both chances and improved as a unit to a perfect 12-for-12 over its past five games.

Fleury excelled despite facing 41 shots, making 39 saves including a key breakaway save with just over twelve minutes remaining in the game on Devils forward Damien Brunner.

“I think it’s not like a shootout where everything happens quicker (on the breakaway),” Fleury said. “I just covered as much net as I could.”

The outstanding performance from Fleury was every bit necessary. After scoring three in the first, the Penguins struggled to breakout of their own zone and establish a forecheck behind the New Jersey defense. The constant pressure was bending the Penguins until the final horn, but Fleury would not let them break.

“They came out hard in the second and sent a lot of guys to the net, looking for rebounds, tips and screens,” Fleury said. “Even though they scored two goals, I think we didn’t panic. Still focused on the game. They just missed the stick on the back door at the end (laughs). A good break for us.”