Sidney Crosby is 1 point away from a career 1000 points. How awesome!! The Penguins beat the Canucks (more like shut them out at PPG Paints Arena) 4-0. Kris had a great with an assist on the 3rd period Matt Cullen goal. It’s his 24th assist of the season.

Snap Shots: Pens 4, Canucks 0
Thoughts, musings and observations from the Pens’ 4-0 win against the Vancouver Canucks at PPG Paints Arena.

*Sidney Crosby’s quest for 1,000 career NHL points took one step closer to fruition. Crosby recorded an assist, a beautiful one at that, to post point No. 999. That puts him within 1 of the historic number.

Crosby set up rookie Jake Guentzel, his new wingmate, on a nifty give-and-go play. Guentzel fed Crosby the puck from the slot to the side of the net. As the Canucks players shifted over, including goaltender Ryan Miller, Crosby sent the puck back to Guentzel, who had an easy tap in.

*Guentzel is one heck of a player. The kid has incredible hockey sense and his playmaking ability is superb. He showed that he can read and play off of superstar talent. He should do well on a wing with either Crosby or Evgeni Malkin. 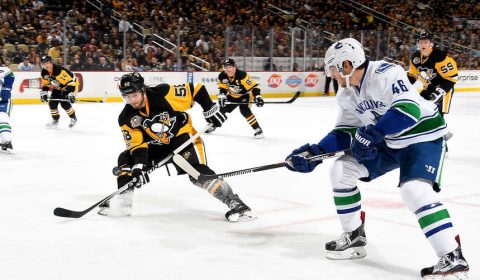