I’m a really big Penguins fan and my Mom always tells me to let her know when there’s a signing coming up. I got an e-mail saying they were having another one at Tom Clark on 2/17, I had gone to the previous one and I was so happy to hear they were having another. Kris Letang is my favorite player so that made me excited too. We drove from Punxsutawney all the way to McKeesport and got in line around 3:30 p.m. Kris Letang was the first to arrvie at around 5:30 p.m. then the other players followed. I was second in line and the guy who organized the event said he would take a picture of me and Kris, because he knew how far I drove. I got my GO PENS towel signed by all the players, but when I got to Kris I handed him my Kris Letang purse. After he signed that I asked if he would mind signing my picture too, and he said “yeah sure.” I got out my huge poster size picture of him and I and asked him to put “to Autumn” on it. He paused for a second and kind of quietly said “I don’t know how to spell that..” Pascal Dupuis started laughing and I began spelling my name for him. When I got to “mn” he said “mm?” i said no, “mn” he said, “nm.” He was smiling so I laughed a little, and Dupuis said “MN!” Kris started laughing, and said sorry. Then Bill Harvey (the guy who organized the event) told Kris he wanted to get a picture of us because I had drove so far to meet him. Kris looked surprised and smiled sweetly at me, pushed back his chair and flagged me over. After we took a picture together I got my camera and asked him if i could take one of him. He looked at me kind of funny and said, “you don’t want to take another one with me?” I said YES! So my Mom took another picture of us. Then I looked at him and said “Thank you, it was really nice to meet you.” He then looked down shyly and mumbled “your welcome” and before I turned around he smiled at me.

I was really surprised on how much time he spent on me, he never once tried to rush me along. He is, and always will be my favorite player, and I’ll never forget meeting him a second time. : 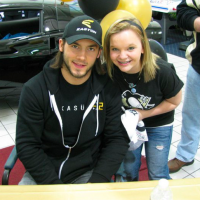 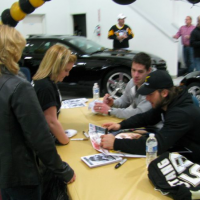 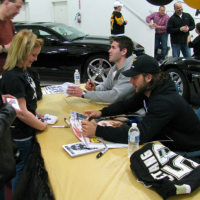 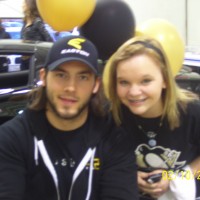 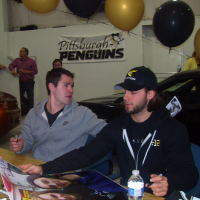