I met Kris Letang tonight, for the second time. 😀

He was doing a signing at the Ross Park Mall in Pittsburgh.

I had bought my tickets on Monday, in case it sold out, but as it turned out, they were still selling tickets tonight. I was still glad I had them ahead of time! 🙂

Hubby and I got to the mall around 4:30. We thought we’d be plenty early, but the line was already forming and was halfway down a utility hallway in the corner of the mall. Within a few minutes, the line wrapped all the way around the hallway and started back up the other side, toward the mall. It had just about gotten back to the mall when security came around and made the people who were in the wraparound line stand outside – and it was cold, less than 30 degrees! So glad we were inside. Hubby said he would’ve left me there if we’d been waiting outside. 🙂

I was tweeting with my good buddy Theresa, who created and maintains the first (and only) Kris Letang website, www.krisletang.org. She helped me pass the time while I was waiting – so excited! 😀 She had also mailed me a note to give to Kris about the fansite, so I was looking forward to giving that to him too!

People started saying Kris had arrived around 5:55, but the line didn’t move. At one point, someone came back and said “He’s here – a tall guy with glasses.” Um…no. 🙂 We heard he was REALLY here around 6:00, right when the signing was supposed to start, the line started to move. I got really anxious and excited at the same time!! I met Kris once before, at the auto show, but I was as excited as I was the first time. 😀

I took a few pictures while we were getting close but they’re all from the back. 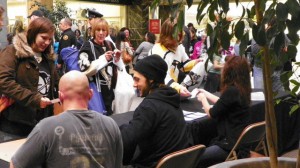 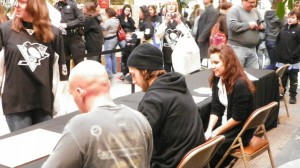 Just as I was starting to take pics, the guy took my ticket and told me it was my turn!  So I walked up and Kris looked at me and put his hand out for me to shake.  I did, and then I handed Kris the photo I’d decided to have him sign – a picture of him and Flower from the All-Star game this year.  He looked at it, sort of smiled, and said “What color?”  He had an entire selection of seriously about 20 Sharpies, all different colors, on the table in front of him.  I said “It doesn’t really matter.” I just smiled like a total nerd because all I could think of was that GIF. 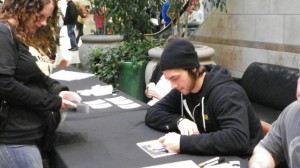 I told him blue was fine, so he signed my picture.  I asked for a picture, so here that is.  I am SO unfortunately awkward.  :/ 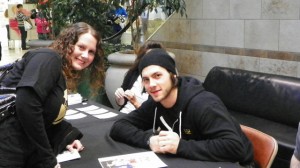 He saw my shirt and smiled, and I was hoping he’d comment on it, but he didn’t.
I gave him the note from Theresa next, and explained quickly to him that she created and runs the fansite and she had sent this along for him.  He listened intently, smiled, said “Cool,” and then “thanks” as he looked at the envelope. 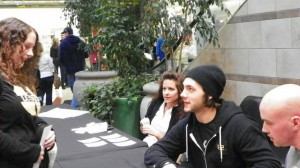 He’s listening (and apparently, so is that girl.)  🙂
The guy taking tickets was telling my hubby to go, though he was trying to give me more time by fumbling around with his camera (and he was trying to video it but it didn’t work) so then I stepped away and he got a Penguins sign signed by Kris.
A few random pictures after we left the immediate area: