At first i walked up to him and he had no idea i was behind him and kind of jumped when he turned around, i asked if i could take a picture with him and he said, “yeah, sure.” He pushed his chair back and leaned in toward me, then the lady who had my phone attempted to take the picture but she said it was all dark. I reached for the phone and looked at it for a second then Kris said “your finger was over the lense!” The lady laughed and Kris said “Technology” in a sarcastic voice. The Lady went to take it again and Kris looked at her and said “Your finger is over it again” looking at me laughing. Finally she moved her finger and got my picture. It took a lot longer then i expected but i didn’t mind! 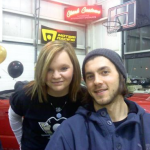 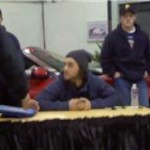