On November 23, the Penguins had their usual morning skate because of their game later that day against the Blues. That morning my friends and I got up at six thirty and went down to Consol Energy Center. It was pouring down rain, windy and freezing cold. We watched as the boys drove in for morning skate. Deryk Engelland, Marc Andre Fleury, Sidney Crosby and Chris Kunitz were the only four players to stop on the way in. Then we had to wait for them to be done with practice. We sat in the car for about an hour and a half and it seemed to drag on forever. Then it was time to go back down to the gate and wait for them to come out, luckily the rain had stopped but it had gotten much colder. Although most of them didn’t stop Kris Letang did. We all formed a line next to his car and one by one people took pictures and got autographs and then it was my turn. I walked up to his car and he looked at me and flashed a grin and said “hi how are you” i said “good. how are you” he replied with a “I’m alright thanks” I then handed him my picture, he kind of just looked at it for a second and wasn’t too sure if he liked it or not. He went to sign my picture but wasn’t sure where to sign it, so he asked me “sign here?” i said “yeah you can sign it where ever” He started to sign the picture and then he quickly lifted up his wrist, because he’s left handed and didn’t want to smear it. He handed me the picture back and then i asked him if we could take one, he said yepp sure. We took our picture I told him thanks and good luck in the game he said thank. I was the last one to get stuff signed so after I was done he waved and then he left. 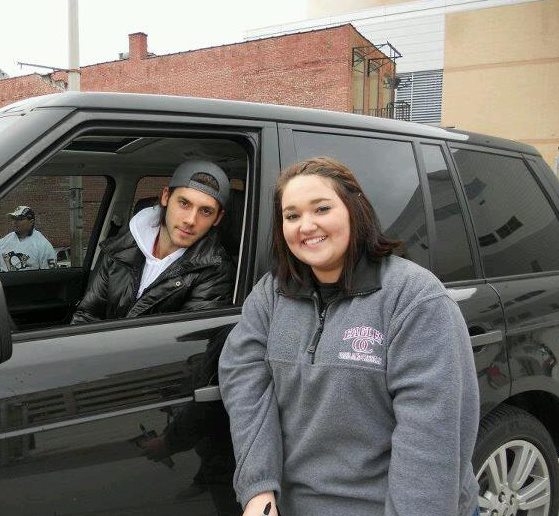