I arrived at the signing around 7:10, we thought we were the last people to arrive but a bunch of people came after us. We waited about 20 minutes for the boys to come out. Kris Letang was first. He was sitting beside Paul Martin. We said hey, and I asked him to sign my picture. My picture then slipped out of my hands and under the table that he was sitting at, he picked it up, I felt so dumb. He looked at the picture and was like “oh wow!” I was like “yeah it’s a sick picture right?” He was like “yeah I like it!” At the bottom of the picture it said “KrisLetang.org” He asked me, What’s KrisLetang.org? So I told him, oh it’s a fan-site! He was like “What? Really?” Honestly, he was so flattered. He then asked me what .org was, I was like “oh it’s kind of like a .com”, he asked the people around him what it was. They were like, why? He’s like “someone made a fan-site! :D” He asked me if I had made it, and I was like “haha no I didn’t, but I’m sure if you Google yourself, that will come up” He was like “oh that’s really cool.” It was really sweet to see how happy he was that someone had made a site for him. He was really nice, and thankfully I didn’t fan girl, I actually managed to make conversation. After he signed my picture, I asked to take a picture with him. I said thank-you and told him good luck at the game tomorrow and that I was going. I really didn’t expect him to be so nice, he was pretty shy but you could tell he was just a really nice guy. It’s refreshing to meet people like that, I’m glad I got the opportunity to meet him, and hopefully he checks out this site, I mean who wouldn’t?
-Natalia Coronado
[nggallery id=3 w=width h=height]
Here is the picture of Kris looking at the wallpaper, which Natalia downloaded from the Media section! 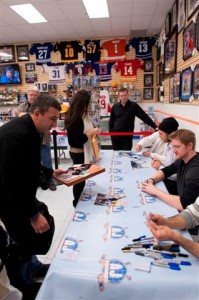