Crosby wins it for the Penguins with an OT goal! Beat the Islanders 3-2! 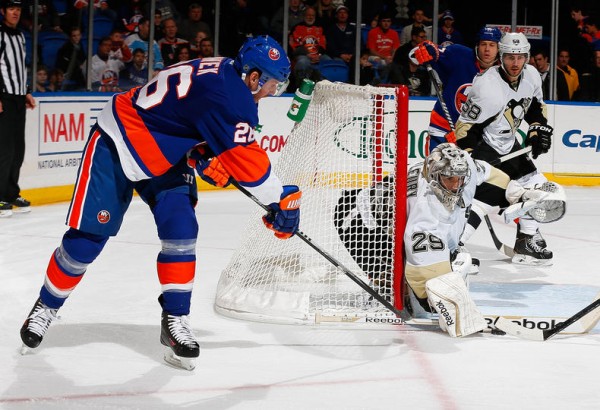 It wasn’t pretty, but it counts for two points just the same.

The Penguins overcame a 2-0 deficit and a sloppy start in a come-from-behind 3-2 overtime victory against the New York Islanders Tuesday night at Nassau Coliseum.

Captain Sidney Crosby, who scored two goals in the game, capped the win with a ferocious backcheck, stealing the puck in the neutral zone zone, and barreled his way toward the goal against three Islanders. Somehow he willed the puck into the goal.

“I got the puck around their blue line and was able to get some speed,” Crosby said. “I had a lot of time to wind it up. Their D were pretty flat footed because they had to gap-up. I had to get through there and get a shot off.”

“It was a highlight reel goal and we¹ll see it again I’m sure,” head coach Dan Bylsma said. “The work ethic, backcheck battle, wins the puck, it didn’t look like good odds at that point in time. He cut through the defense and that puck found a way.”

The Penguins fell behind 2-0 on two scores from Kyle Okposo in the first period after some ugly play by Pittsburgh.

“We gave up five three-on-twos in the first period to (John) Tavares, Okposo and (Thomas) Vanek. You’re giving up good opportunities to skill players. They made us pay,” Bylsma said. “They got ahead in this game and it took us 40 minutes to battle back and stay in the game.”
The Penguins rebounded with three unanswered goals, including two on the power play. James Neal also scored for the Penguins. [ Source ] 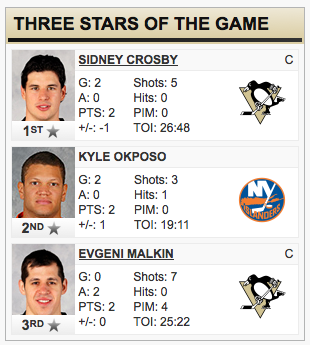 
Kris Letang shared this photo of him and his child

Kris Letang shared a photo of him and his daughter