Letang scores his 1st goal of the season; Pens best the Rangers 6-3

What a great game at Madison Square Garden last night! Kris got 2 points during the game, 1 for his assist on the James Neal 1st period goal, and the 2nd one on his empty net goal in the 3rd period.  For more about the game, highlights, and pictures here is the game wrap report: 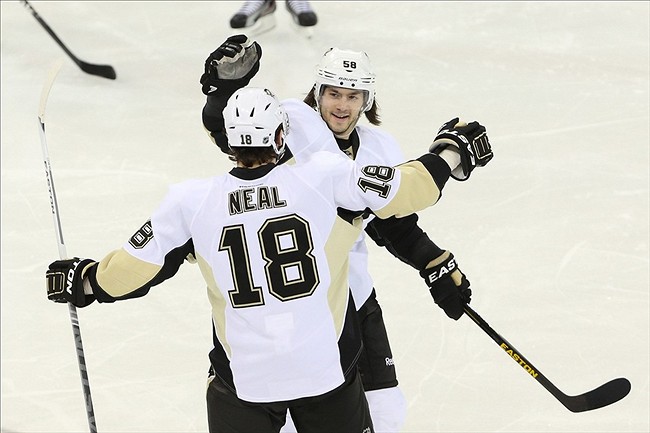 10 More photos at the gallery [Click image to enter]

The Penguins hit the road this weekend for back-to-back games against Atlantic Division opponents, and they return to Pittsburgh having won both of those contests.

After beating Philadelphia 3-1 at the Wells Fargo Center on Saturday, the Penguins traveled to New York City and defeated the Rangers 6-3 in their home opener at Madison Square Garden on Sunday.

“We’re off to a good start,” forward James Neal said. “It’s a shortened season, so it’s huge to come out of the gates fast. Two good tests for us in Philly and New York. We got a little sloppy in the third, but we did a good job in both buildings and it feels good in our room.” Complete End Game Report

NOTES
Letang, who led the Penguins in minutes-played (24:17), was impressive throughout the game, especially on the power play. He manned the center point well, distributing the puck to his teammates and keeping play moving. He also used his superb speed to jump up in the offense when he could. … Kennedy now has two goals in two games. … The Penguins finished 2-for-5 on the power play and 1-for-4 on the penalty kill, with that goal coming on a 3-on-5 disadvantage. … Rick Nash scored a shorthanded goal for the Rangers with just over five minutes left in the third period.